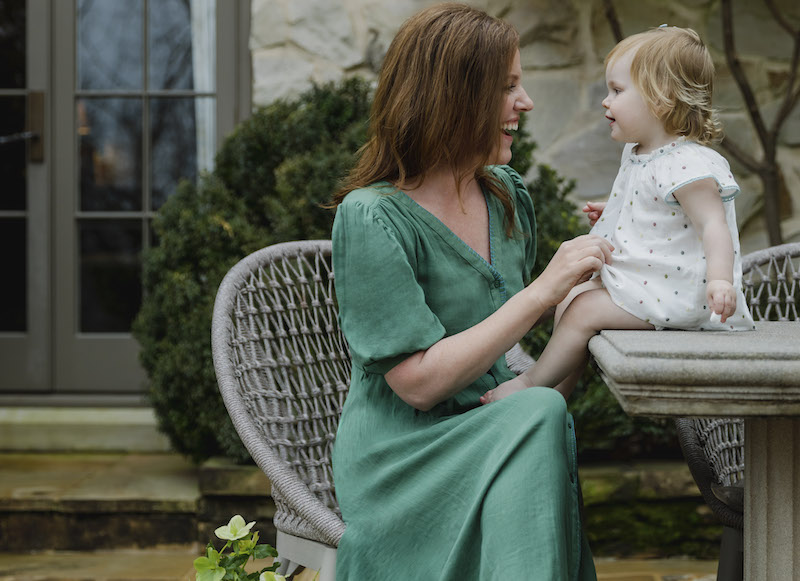 February 3, 2015, would forever change Katie Gaston’s life in more ways than one when she gave birth to her first child, Greer.

At that time, Katie had closed her retail shop Full Circle in Forest Park days before her son’s arrival, but as she was busy caring for an infant—who is now in first grade at Mountain Brook Elementary—and learning how to be a mom, her mind wasn’t idle but rather dreaming. She looked around and saw beautifully made children’s clothing that felt unrealistic for everyday wear. Surely, she thought, those two qualities didn’t have to be mutually exclusive. There seemed to be “a hole in the market between traditional southern clothes and the more modern baby clothing brands,” Katie says. 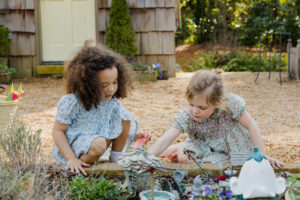 Simultaneously, as she began working in residential interior decorating, she saw an opportunity in the styles offered for women too. “I was going from being at home with my baby to being in a client’s home to running to the market to going to lunch with girlfriends,” she recalls. “Plus I was nursing. I needed clothes that could go anywhere and everywhere with me.” She found she was in need of machine washable, fashion-forward and nursing-friendly clothing that she would want to wear for every aspect of her life—something “comfortable but put together.”

Just after her daughter Ada Kate was born two years later and after years of research into starting a clothing line, Katie came across a company out of New York whose sole purpose was to launch brands. As it turns out, that company quickly got on board with a firm belief in Katie’s idea for both women’s and children’s niches, and they started working together in the summer of 2018, with the company providing production, finance, marketing and back-office support to get her brand off the ground.

But what would it be called though? When her children were young, Katie would call them “baby love.” “When you say it fast and you’re southern and you’re tired, it comes out ‘bay-buh-luh,’” she explains. And thus the Baybala brand was born—with a goal “to make easy-to-care-for but beautiful clothing where we aren’t sacrificing style or design elements for care or ease of wear.” It’s about “ease and style without compromise,” as Katie likes to say it, stocking wardrobes with the kind of clothing you want to reach for every day. Baybala officially launched in November of 2019.

And then came COVID. Quickly, Katie’s moment of being the most prepared she’d ever been to start a business vanished. “We had spent over a year creating projections. We had goals for going to market. We had numbers of doors we wanted to be in for wholesale,” she recounts. “We might as well have lit that piece of paper on fire. Everything went out the window, and for everyone in business at the time, it was like operating in the wild, wild west.” 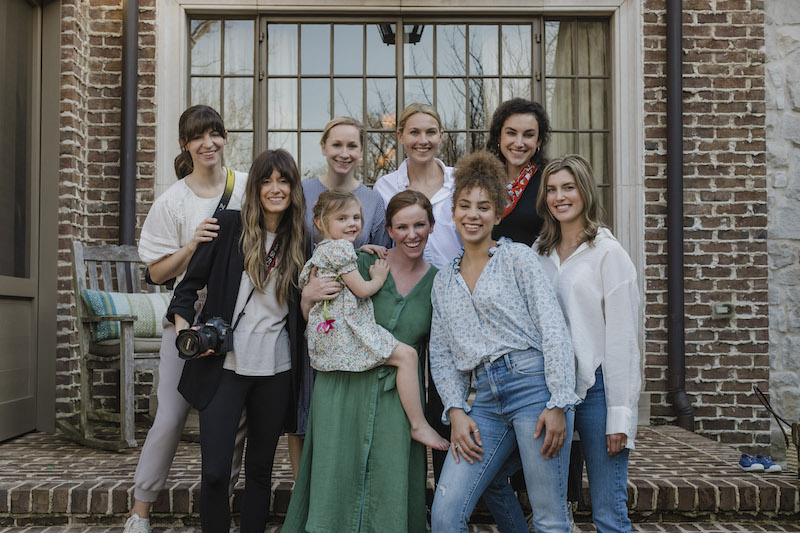 Just before the world shut down, though, Baybala moved its photoshoot for spring/summer of 2020 from New York to Birmingham at the last minute as they watched things in New York go downhill. Within a couple of days, they found a full team of Birmingham talent—a photographer, stylists, producer, assistants, models—and shot everything at Katie’s house outside Mountain Brook Village—not far from where the Mountain Brook High School graduate grew up—on the Thursday before everything closed on Saturday. And that all brought a silver lining to Katie—identifying local talent and leaning into doing all creative work for photoshoots right here in Birmingham, something they’ve continued to do as they have grown and don’t plan to change.

Now more than three years into this journey, Katie’s title might be founder and creative director of Baybala, but she’s literally done every part of the business there is to do, much of it from her home office in a spare bedroom off her kids’ playroom (though Baybala has plans to move into office space soon). In fact, the day of our interview she’d had a new local employee start and had passed off the hat of packing shipments for the first time ever.

One hat she’ll likely never give up though is that of designer. In the beginning, Katie designed alongside a seasoned fashion designer who had worked at the likes of Celine and Jil Stuart since she didn’t have any experience designing clothing. These days she does the design work herself in collaboration with Baybala’s technical designer, Birmingham native Caroline Harrington.

Months before you see new dresses, shirts and more on the Baybala website, Katie’s process starts with textiles, as this is where she has always gleaned the most inspiration. She builds designs around the fabric selections and then designs the details of the silhouettes.

From there the factory receives a tech pack–the equivalent of a building’s architectural drawings and creates a sample of the garment, which sometimes arrives in Birmingham “a little bit of a disaster,” Katie says. Once it arrives, Katie and Caroline fit the designs on Katie’s kids, pin them, measure them, study them for details and potential defects down to the color of the seaming thread. From there the factory sends additional samples until the garment is just right and ready to be photographed and produced. This timeline often takes at least six months from start to finish. 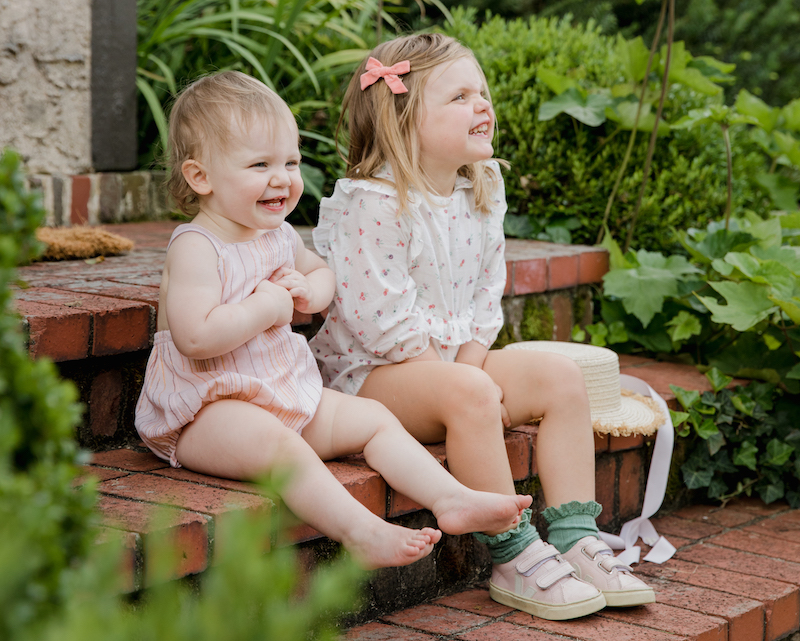 Today you can find Baybala clothes in ages 3 months up to 8 years and for women’s sizes extra small to large on Baybala.com and at around 15 retail stores from East Coast to West, including Swaddle in Homewood.

Day in and day out, Katie draws inspiration from textiles and travel and from feminine detail-orientated runway fashion that she translates to modern, everyday styles. She’s also always looking to her own closet and asking: What am I reaching for day to day that I love? And how can we make it better?

Also top of mind is what’s practical to wear when a toddler spins in circles or runs away from you when you dress them like her youngest, Margaret, not quite 2 years old, currently does. Whenever she can, Katie skips buttons and hook-and-eye clasps in her designs. “As southerners, we love the aesthetic of heirloom pieces—the lace and the delicate detail and all of the thought that goes into that—but you aren’t going to send your kid to school in that,” she notes. Instead, she uses those beautiful pieces as inspiration to create styles that can be worn every day.

As for women’s clothing, while she doesn’t design everything with nursing and pregnancy in mind, these seasons are a reality for many women, and with most pieces, Katie likes to keep that in mind when finalizing each piece. “It’s amazing how many things are out there that with just a teeny tiny tweak would be so much more wearable and useful,” she says.

All in all, her design philosophy is the same for interiors and apparel. “When you design for families, any designer will tell you you have to look at practicality first, but you don’t necessarily have to sacrifice something that looks good,” Katie says. “It’s about embracing the reality of your lifestyle and designing for that.” 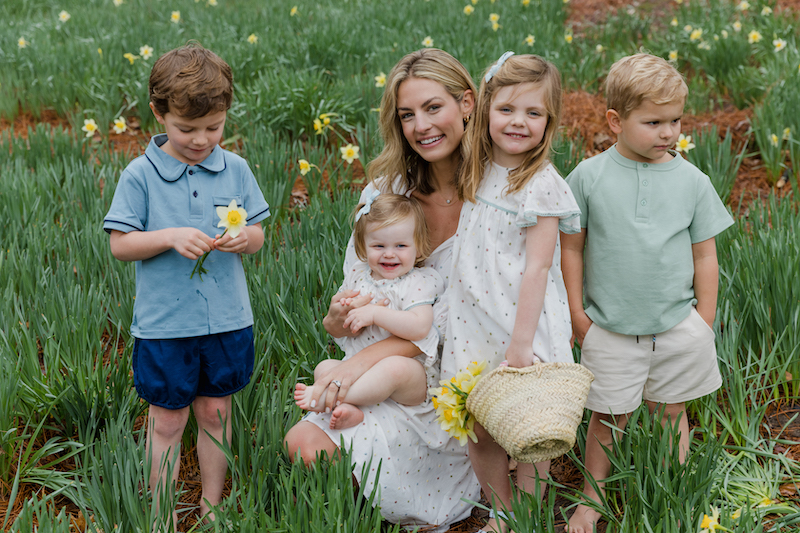 Katie’s three kids choose the Baybala items in their closet often—although Katie admits her older daughter Ada Kate, 5, loves a sparkly unicorn too. If one of her designs is itchy, they are the ones who tell her. “One of the most rewarding things is having them be a part of what I do,” she notes. They also might or might not have been bribed with a fish tank—which is still in their house—to model in a photoshoot at one point too.

From here Katie plans to build Baybala’s direct-to-consumer and wholesale reach and continue to always be improving the product. She also hopes to build Baybala’s team of Birmingham talent with positions that can be flexible for whatever their family life looks like. One day she hopes to take her kids to the factory in India that produces Baybala clothes and show them the ethical practices she herself saw when she visited before the pandemic.

As to Baybala’s spring and summer 2022 collection that’s out now, Katie says to look out for both a smocked group and a blue floral group that really hit her marks of feminine, easy-to-wear, and detail-oriented, and to watch for new items soon after that in partnership with artists.

At the heart of it all for Katie, though, is something more than clothing. “I want Baybala to be a joy both to me and to everyone who works for and with us,” she says. “I think we have done that so far, and I hope we continue to do that for a long time.” 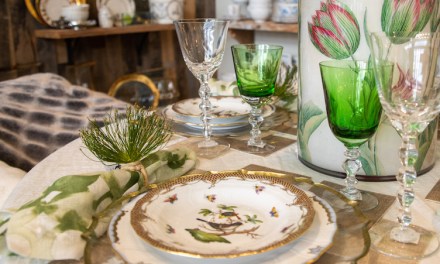 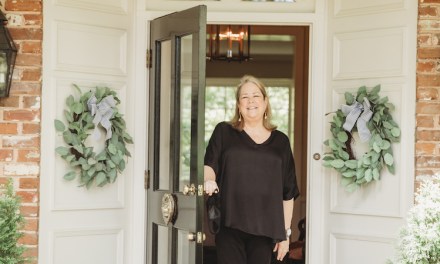 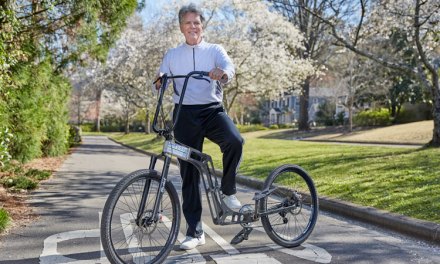 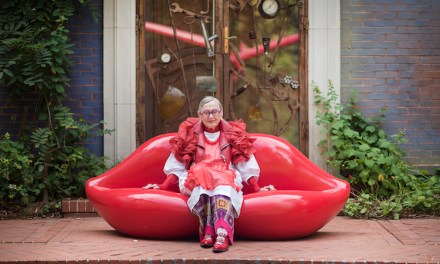