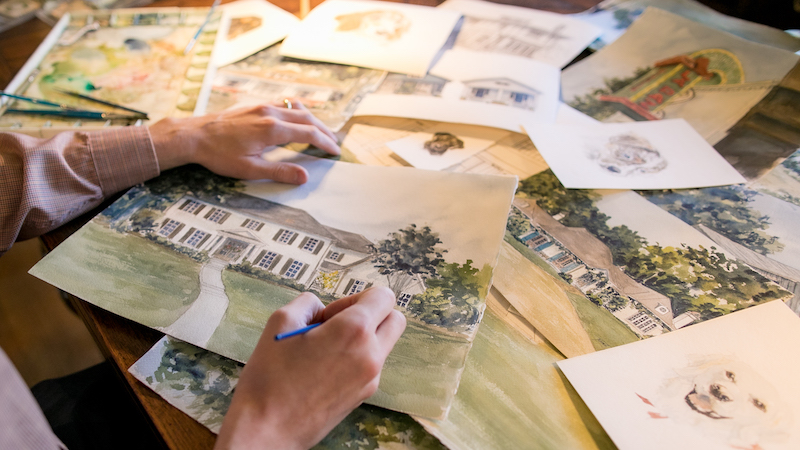 Porter Rivers grew up in small-town splendor at the edge of the Alabama River. The rural landscape, where he fished and hunted throughout his childhood, was also marked by bright and storied historic buildings, the ones that always stuck out to him on familiar streets.

For a kid who always had a gift for drawing, Selma became the setting for Porter’s emerging artistic spark, the one that’s forged a title that took him years to truly claim for himself. He’s pursued many vocations and held different titles throughout his young adulthood: interior architecture student, business student, Samford University SGA president, financial analyst and emerging artist.

More specifically, he’s a watercolor painter, with a focus on homes and buildings. “I grew up being fascinated by the historical homes, which is how I got started,” he says. “To me it’s a house, and to others, it’s where they’ve raised their family or lived for 50 years.”

Along with commissioned home paintings, Porter paints landscapes, portraits and other subjects from his Mountain Brook home as he expands his layered, vibrant watercolor style. The projects have fostered his childhood hobby into a passion and a new business, while he still works in finance during the day. 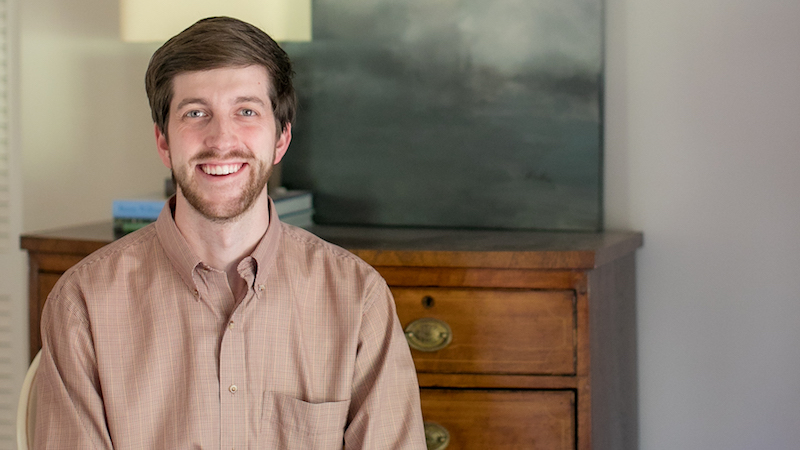 The first step towards an unexpected painting business was two-fold: one, his college courses in interior architecture during his first term at Samford, and two, meeting a Selma-based neighbor and artist who commissioned him to capture landmarks in the Queen City. In his structures and sculpture class in 2013, Porter began sculpting some of Selma’s architecture right before he was asked to paint several historic churches and buildings in his hometown during his Christmas break.

The architectural pieces came naturally to Porter. The important details integral to the building— the small details on the homes, the scale and perspective, the colors and surrounding settings—made sense to him, and the style didn’t take long to master. His initial sketches became one of his favorite parts of the painting process, and he still makes that the first step of each piece, though he could start directly with the paint.

After these projects, Porter continued to paint during breaks from school, which later became his sole creative outlet when he switched to his finance major. Christmas and summer breaks became his biggest opportunities to learn more about watercolor and paint more homes for family and friends in Selma. “When people come with a house they’ve lived in for years, or something they’re putting their trust in you to convey, that’s impactful for me,” he says.

Porter’s watercolors set homes and landscapes in deep colors that help develop the warmth and nostalgia people associate with a house. “I’ve been told it’s not a traditional watercolor—it’s not as translucent,” he says. “It’s heavier, and the colors are a little more dense.” 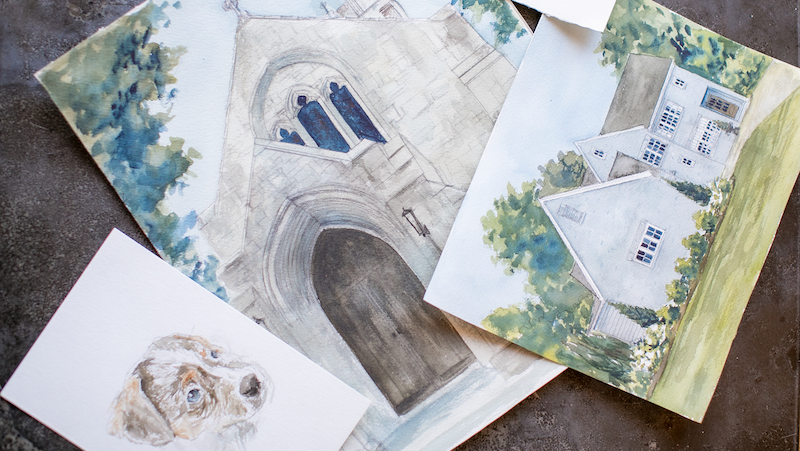 The homes are framed in greenery, and Porter’s textured technique grounds them into the paper, rather than letting watercolor make them too light and airy. That he saves for landscapes on the river banks or rural Alabama fields, flowing in blues and grays.

After Porter graduated from Samford in 2017 and began his current position at Medical Properties Trust, he continued to paint during his time outside of work. Around this time, his wife, Emily—who shares the artistic eye as an interior designer at Nequette Architecture & Design and has been one of Porter’s biggest supporters—helped him put his work on social media and broaden his reach.

Over time, people have come to Porter with more than just homes and bring other stories that require different subjects. He’s painted family members, pet portraits, wedding details, and more personal moments that he’s been trusted to keep.

Porter’s official LLC launched in 2020 and his ever-growing portfolio has continued to solidify “artist” as an important title. “About a year ago, I wouldn’t have said I was an artist,” he says, “but I like to tell people now. I’m not worried about committing to that idea.”

The financial analyst and watercolor artist titles work hand in hand, and always have since Porter first left his architecture classes for business school. “The balance works well for me,” he says. “People ask me if I would ever do art full time, but once it’s actually work, I don’t know if I would enjoy it was much as I do now. The two jobs play well together. One involves numbers and reading leases, the other is working with a paintbrush.”

Porter makes time to paint after work and on the weekends, finding calm in the painting process during busy seasons. “The busier I am and more I’m on a schedule, the better. It’s a way to step away from everything and destress,” he says. He’s currently working on creating his own studio space in his and Emily’s new home in Mountain Brook.

“The reason I keep doing it—and what I love—is interacting with people,” he says. “The slogan I’ve started saying is ‘preserving memories in watercolor.’ Once I realized I was able to capture a memory and give that to someone, that was so meaningful.”

You can find Porter’s art in ALKMY in Crestline Village and follow his work on Instagram @porterriversart. 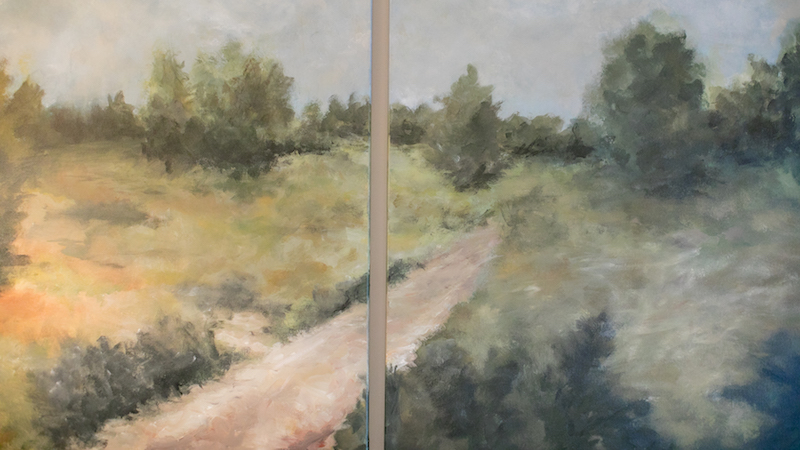 Porter began creating ornaments in 2021 that became a special extension of his own Christmas traditions. “I grew up loving Christmas,” he says. “My grandmother and I were very close. She lived across the street from us, and I would always help her decorate for Christmas, from the time I was 5 until I was 25. She passed away two years ago, and I’ve continued to love Christmas the way she inspired in me.”

Drawing from his grandmother’s vintage ornaments, Porter painted small nativity scenes, stockings, bells, and wreathes in sage and gold and mounted them with a clear acrylic back to hang. “I love the idea of doing small pieces because not everyone needs a large work,” he says. 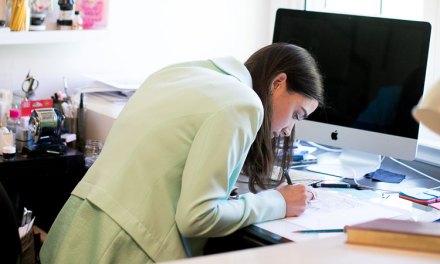 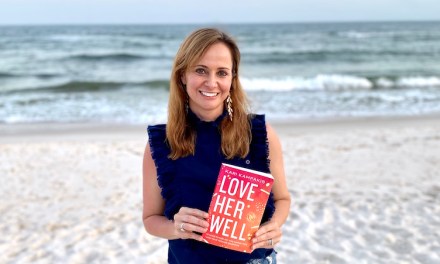 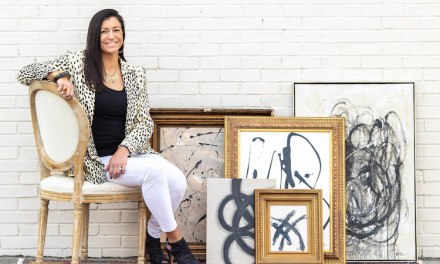 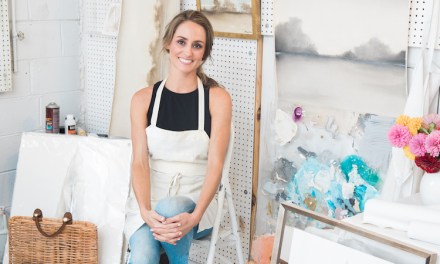 A Source of Strength