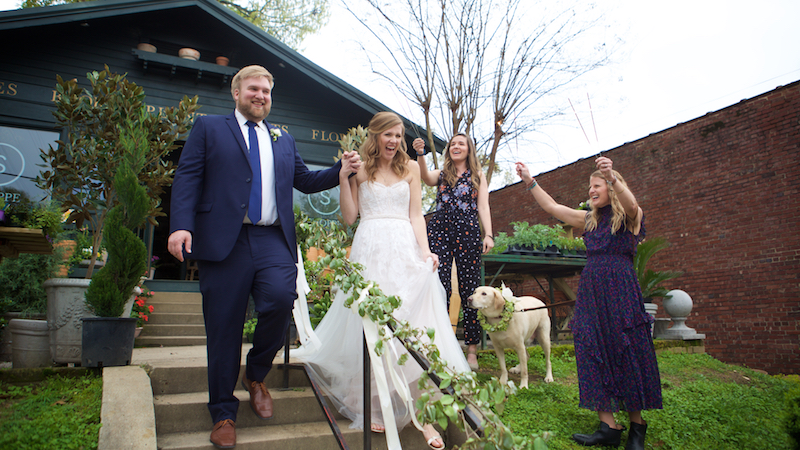 Lindsay Westlake and Jim Trucks knew two things when they got engaged in September 2019. More than any details or fanfare, they wanted to be able to celebrate their marriage with all of their friends, and they wanted a short engagement. Even just six months felt like way too long. So they booked a reception at Vestavia Country Club and a ceremony at Redeemer Community Church for March 21 and made plans for a honeymoon in Hawaii over Lindsay’s spring break from teaching at Crestline Elementary. Quickly the guest list grew to around 500.

Two weeks before their big day, Lindsay and Jim went to a wedding at their church and imagined their own ceremony in the sanctuary space where they had gathered each Sunday of their relationship. At the time, they knew about COVID-19, but it wasn’t on their radar that it could affect their plans. If anything they thought it might start to affect Birmingham after they returned from Hawaii.

A week later, though, the mood shifted. Eight days before their wedding, schools statewide were cancelled for three weeks. Six days out—the Sunday before their Saturday wedding—the CDC recommended a 50-person limit to any gathering. By Monday Vestavia Country Club had closed for the foreseeable future. Piece by piece, the day Lindsay and Jim had hoped for was crumbling. “In wedding planning you have control, and then all of a sudden (we) had no control,” Lindsay recalls. “We didn’t care about the details. We cared about our church and all of our friends being there—for everyone to have fun and to have the memory of all our people all in one place. As the numbers changed, it was heartbreaking that all the people we love couldn’t come.” 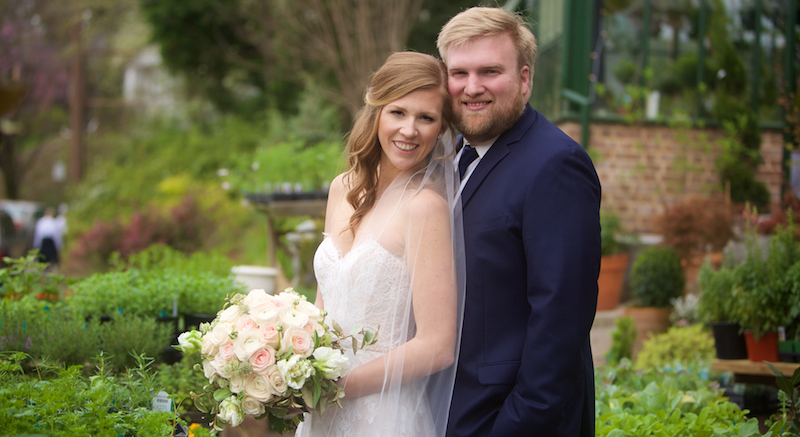 That Sunday they started working on alternate plans. Numbers knocked down to 25 and then ultimately to 10. Each time they would find peace with a new plan, Lindsay would get yet another call to change it, breaking one more hope she’d started to hold. At some point she and Jim thought they might just marry in their pastor’s backyard with a couple of witnesses.

Early in the week though, they went over to their friends Jeff and Jess Heine’s house, where they gained the added counsel of Jeff, the pastor they’d planned to marry them. “Jeff said, ‘Make no mistake that God has always known this day for you, and it has always been good,’” Lindsay recalls. “That was a turning point for us.”

For Lindsay the hardest part was the day she had to text all of their guests to update them. “I wanted everyone to know that though this is disappointing, we believe the Lord is never far from us,” she explains. “We were sad and it hurt to change the ceremony we had planned to speak of the Lord’s goodness and a reception to celebrate that, but the story God is writing is not sad. It was the biggest picture of bitter and sweet.” 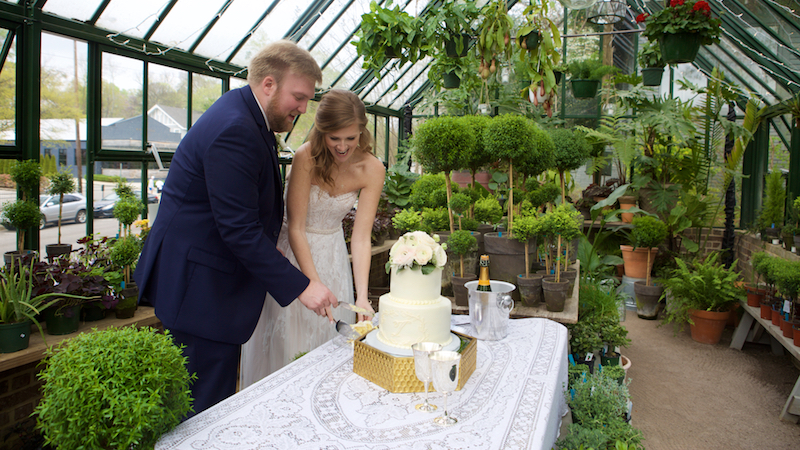 Around that time of the week plan after plan started to stick. Jim and Lindsay couldn’t have their ceremony inside, so they moved it out to the church’s front steps—which allowed their beloved labs Winston and Pax to join in on the event. Florist Sarah Peinhardt had already placed the floral order and found ways to rethink the floral designs, including to create floral collars for Winston and Pax, and photographer Beth Hontzas had told Lindsay she was still in even if it only four people were present.

As to the reception, Shoppe in Forest Park offered their space, and better yet, because it’s technically two businesses with The General Shoppe they were allowed to have 20 guests there instead of 10. Lindsay had taught Brick & Tin owners Susan and Mauricio Papapietro’s son at Crestline, so she texted Susan that week to check on catering. From there Brick & Tin cooked up plans to box up their grain salad with chicken—with a beautiful wrapping with rosemary sprigs Susan added. Doodles, which was originally going to deliver shaved ice to their now-cancelled rehearsal dinner, brought shaved ice to Shoppe instead.

Jan Potter at Dreamcakes made a smaller version of the wedding cake they had planned with a gluten-free top layer for Lindsay, who has celiac disease. Lindsay’s brother Brent, a former bartender, created a signature cocktail made with gin, champagne, lemonade and St. Germain, with lids on top, and one of her sister Allison’s friends painted a watercolor of their dogs bearing the cocktail name. “Everybody was in it together,” Lindsay recalls. “It was a sweet reminder that these businesses are facing scary times and good we got to support local businesses we love.”

And so on the afternoon of March 21, Lindsay walked up the steps of the church to her groom, with their immediate families right there, at social distance, to witness the moment. Their friend Jess played the song Lindsay had always wanted to walk down the aisle to on guitar—“Be Still.” Jeff’s homily was brief but thoughtful, and their vision of feeling like they were known as they committed their lives to one another held more than true.

Allison had made new programs for the ceremony bearing the words from Psalm 118 that their grandmother would always say, “This is the day the Lord has made; let us rejoice and be glad it.” “And that’s still exactly what we felt,” Lindsay says. “I got to marry my favorite person, and the whole day was peaceful.” 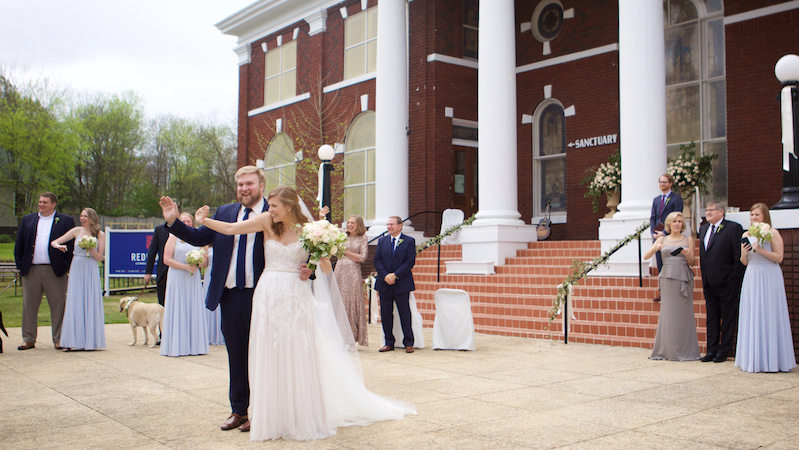 What the newly married couple didn’t expect was to look across the street to find their closest friends “tailgating” in the parking lot at a social distance, or to look up as they started to sip champagne right after the ceremony to see a family friend, Angela Smith, drive by followed by one of Lindsay’s students. From there cars full of students, old friends, church friends and more holding signs and honking continued to drive by—around 50 of them in a parade that Angela and her mom Gail had organized.

“People still show up and humanity is still so beautiful,” Lindsay recalls. “We felt so incredibly loved. It was so sweet to see posters and people’s faces we hadn’t seen. That will always be the most moving part of the day to me.” Friends later told them that the parade had given them something excited about as fears over the increase in COVID-19 cases rose. “And we got to share in this together,” Lindsay says. “It was so special that our wedding day got to be something that brought other people joy.” 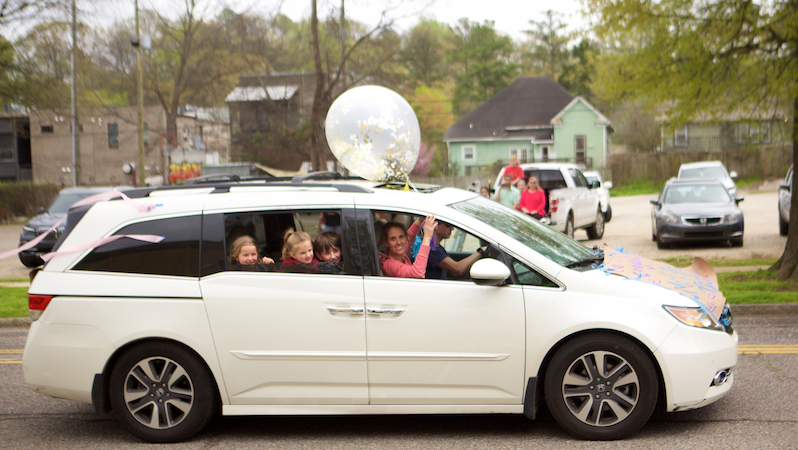 After their intimate wedding, the Trucks travelled not to Hawaii, not to the Old Edwards Inn they’d booked as plans started to change or to the Alabama beaches they’d booked when Old Edwards closed, but to spend a week on a private beach on St. George’s Island that remained open. Hawaii is still on the books, just now for this summer, after they hold a reception at Vestavia Country Club on July 25 that all of their friends can attend.

But even without all their friends gathered on March 21 as planned, the Trucks’ wedding day was beyond sweet. “It was immeasurably more than I ever imagined and not sad or lacking at all,” Lindsay says. “I was blown away all day.” 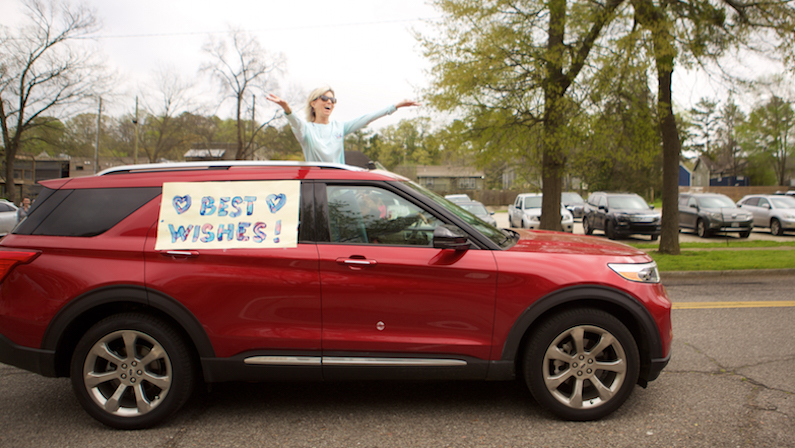 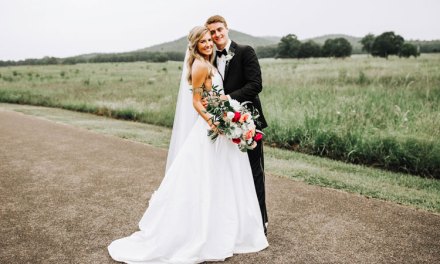 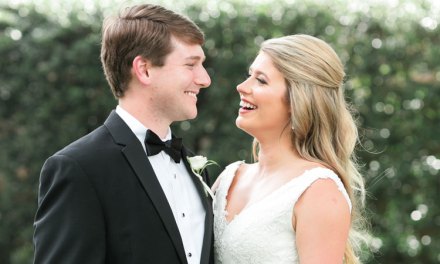 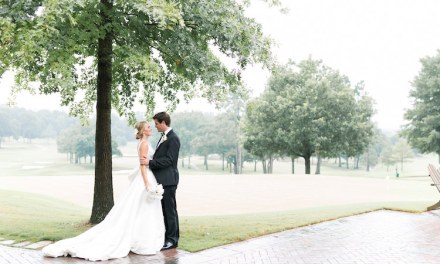 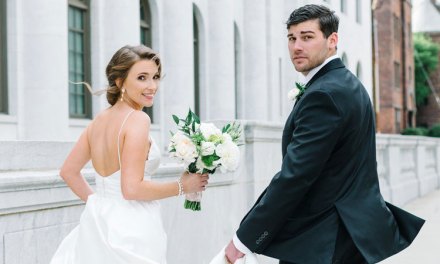