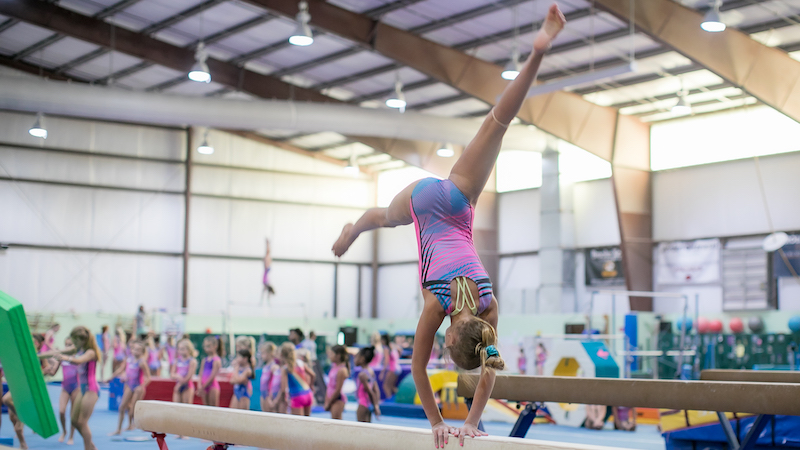 Nearly every day of the year, rain or shine, day and night, take one look out to Mountain Brook Gymnastics’ 22,500-square-foot facility, and you’ll see ponytails bouncing on the trampoline, hear the squeaking of uneven bars as girls take flight, see chalk dust floating in the air, and hear the powerful thuds of landings on the mats. You’ll hear upbeat music playing and the camaraderie of coaches and teammates spurring each other on as athletes defy gravity, rotating through the air and bravely balancing on a beam the width of an iPhone. You’ll hear preschoolers giggling as they attempt cartwheels and see them smiling as they cannonball into the pit of foam blocks.

For nearly 40 years countless kids in the community and beyond have come to love Mountain Brook Gymnastics as a safe and fun environment to flourish, and its nationally recognized competitive team has produced numerous state champions, as well as state, regional and national qualifiers and medalists. To add to its list of accolades, Mountain Brook Gymnastics was selected by the USA Gymnastics State Committee as the 2020-2021 Club of the Year.

Director Leila Burkett has been pouring her life into all of it since 1986, through all the twists and triumphs, and credits the community for continuously rallying to support the gym. “Every time we’ve had an obstacle, not only have we overcome it, but we have raised the bar with community support,” she says. 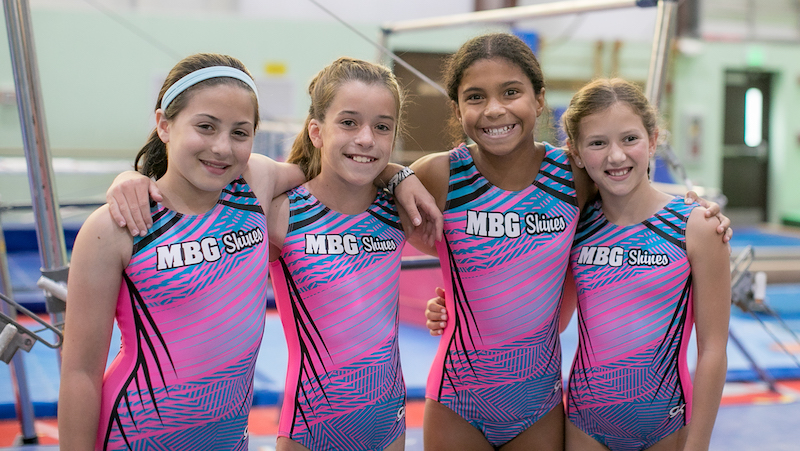 The program started as an after-school offering at Mountain Brook Elementary School. Each time registration opened, moms and dads would line up down Vine Street with folding chairs and newspapers waiting and hoping to get their child into the program before it filled up. The coaches were setting up and taking down their equipment in the school gym, but it didn’t stunt their success. Leila says in 1986, after-school kids were competing and placing first and second in the state at every level offered.

“The classes were just busting at the seams, so in 1991 Mountain Brook Community Education built a building for us on the Mountain Brook High School campus, what would be the state’s first air-conditioned gymnastics facility,” Leila recalls. That location was eventually renovated to become what is now the Spartan Arena.

While they fundraised and secured land to build a new facility, Mountain Brook Gymnastics was housed in a warehouse in an area that required security after dark. Families of the gymnasts and others throughout the community united to urge the city’s approval of a new building, with green ribbons adorning mailboxes, lampposts, businesses and streets all over the area to show support. The campaign was successful thanks to a long list of donors, and construction began near the baseball fields on the grounds of Mountain Brook High School. Five years later, they gratefully opened the doors for business in 2007.

Activities for nearly 750 recreational and competitive gymnasts who enter Mountain Brook Gymnastics each week run as smoothly as a gold-medal routine. Leila says that’s thanks to great teachers and the spreadsheets of highly mapped out schedules. Students go through all four apparatus: vault, bars, beam and floor. Boys and girls ages 18 months to 2 years attend the toddler class with a parent/caregiver. Three-year-olds enjoy the “3 All Me” class, and for 4-year-olds there’s the “Fantastic Fours” class. Beginning at age 5, girls may enter the three-step program of beginner, intermediate and advanced classes, when coaches track their skills. 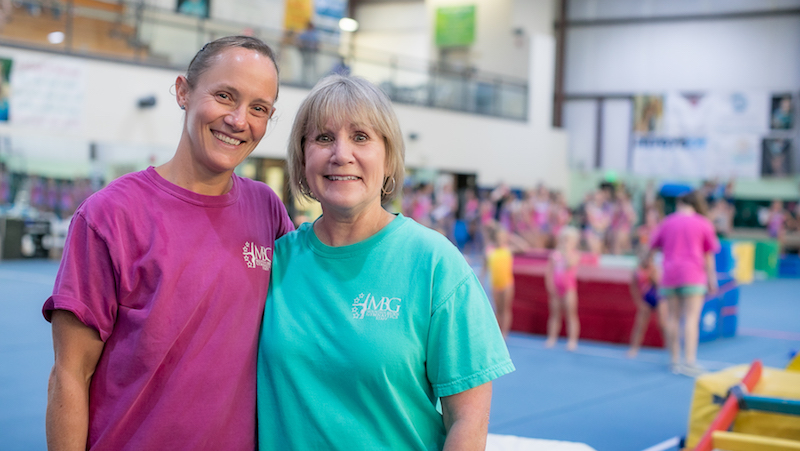 “We’ve had students start with us as tiny 18-month-olds and end up seniors in high school with us,” says Christina Dunaway, director of the preschool and recreational programs. “I actually grew up competing at Mountain Brook Gymnastics as a gymnast, and I decided to pick back up with coaching my senior year of college with intentions of only working until graduation. But I fell in love with the gymnasts, gym parents and an incredible staff that’s like family and have been here ever since.”

Mountain Brook Gymnastics is also known for its birthday parties and cartwheel clinics, as well as holiday camps and summer camps, which always fill up quickly and end up with waitlists. Once a month the gym hosts Flippin’ Friday too. “Kids will enjoy a night filled with gymnastics, a pizza dinner, games and a movie with a snack,” says Becky LaHurd, special events manager, whose three daughters were all competitive gymnasts at the facility. “Mountain Brook Gymnastics has given my daughters much more than just gymnastics—it has given them life lessons, molding them into responsible, capable young women.”

Mountain Brook Gymnastics also has one of the largest competitive teams in the state of Alabama with 125 gymnasts, ages 6 to 18, who compete at levels 3 through 10, supported by parent-led Alabama Gymnastics Education Foundation. In the 2020-2021 season, the team boasted 26 individual and AA State Champions.

Team Director Helen Nabors, a former gymnast at the University of Alabama, says the coaches work hard to create an environment where girls feel safe to be honest, to work hard, to make mistakes and to grow. “We also work to create a place where our athletes can continue to learn at several different levels,” Helen says. “Some girls want to live in the gym, and others want to learn but also want to have time to be involved in other activities. We work hard to help each child reach her goals by providing several different paths.” For team members, practice schedules vary from anywhere around 6 to 25 hours a week. 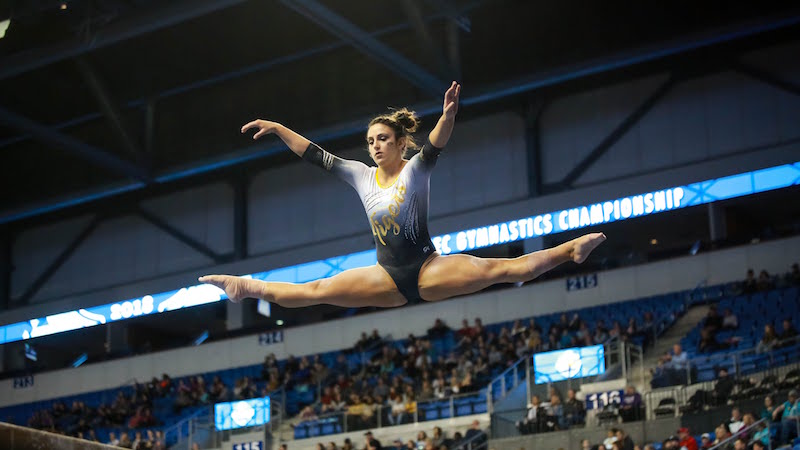 Those long hours of practice have led several of their gymnasts to receive college gymnastics scholarships. Helen says there is a consistent factor she’s seen in gymnasts who go on to collegiate teams—discipline. “Even on hard days, even when they are tired, they continue to put in the work. There are technically four events in women’s gymnastics [beam, uneven bars, vault and floor], but there are also a fifth, sixth and seventh—sleep, conditioning and nutrition—and these gymnasts take care of all the pieces.”

It’s clear to see the gym wouldn’t have its achievements or distinct atmosphere without the like-family staff Leila leads. One of its coaches Hanna Martin knows that full well. Hanna first visited Mountain Brook Gymnastics as a kid in 1991 at an open house event. She ended up joining the team at age 9 and competed until her senior year of high school. “Mountain Brook Gymnastics was a place of refuge and structure for me,” she says. “It’s where I learned to set a goal and meet it, to focus, to work hard, to enjoy a challenge, to work through fear.”

Watching Hanna coach is inspiring even from the sidelines as she passionately shares her motivational speaking gift, encouraging her athletes with devotionals, helpful analogies and stories all stemming from the impact gymnastics has had on her own life. “I think at Mountain Brook Gymnastics we’ve proven that values and character matter, and you can still have those things along with a high level of gymnastics,” she says. “It’s obvious that [Director] Leila’s mission is not just to produce great athletes, but great people.” 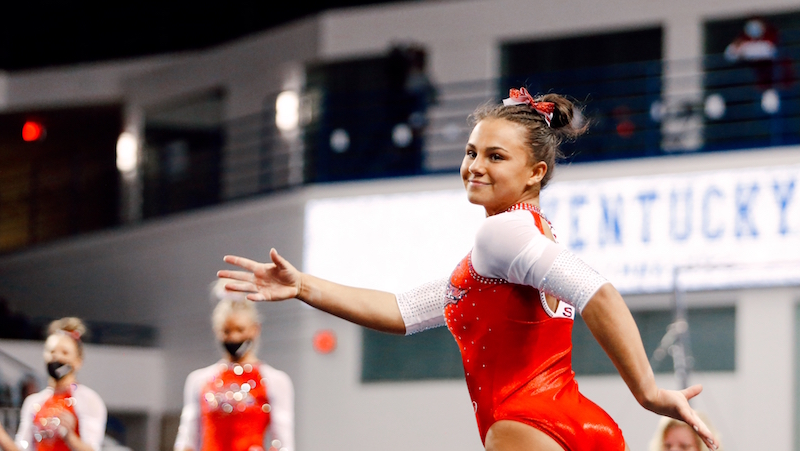 “My mom started me in gymnastics at Mountain Brook when I was 9 years old because at the time I was playing softball, and instead of paying attention to the game, I would do handstands and cartwheels in the outfield. Mountain Brook Gymnastics helped me earn a full scholarship to many schools, with two of them being SEC schools.”
– Brooke Kelly, University of Missouri Gymnastics, 2016 to 2019

“My coaches not only invested in me as an athlete, but also as a person. They helped me work through hardships just as much as they have been there for me in my success.”

“My Mountain Brook Gymnastics coaches helped me during my recruiting process and helped me reach my ultimate goal of competing at an SEC school.”

“Mountain Brook Gymnastics has continuously cheered me on inside and outside of the gym.” 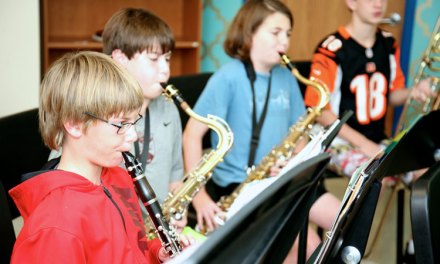 One of Mountain Brook’s Own Leads Sixth-Grade Bands 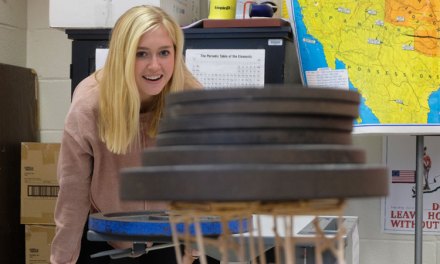 To Fall or Not to Fall 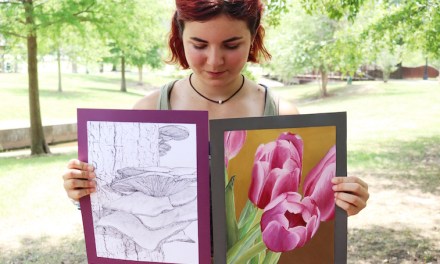 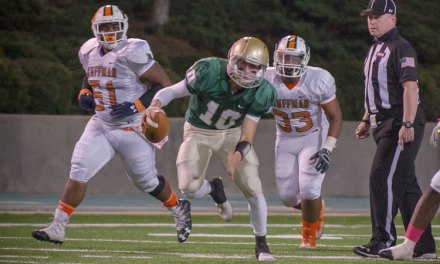